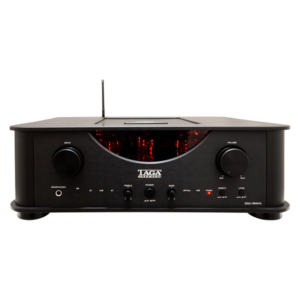 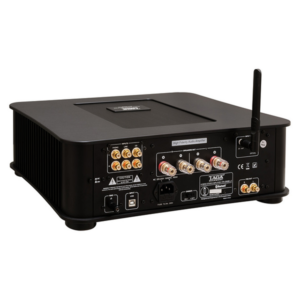 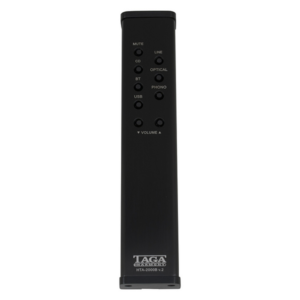 HTA-2000B v.2 is a 150W high-end hybrid integrated amplifier utilizing a 12AX7 tube preamp section with a cathode type amp circuit and a 12AU7 SRPP stage serving as a buffer amplifier.
This solution ensures a very warm, linear and lifelike sound with high dynamic presentation at the same time.

Analog inputs with high-end solid machined brass RCA sockets can accommodate up to 3 stereo devices including a turntable (both MM and MC cartridges) so you can enjoy music from your favorite vinyl records.

You can connect a range of  digital devices and a built-in premium high-resolution 32bit / 384kHz DAC will always provide the best sound performance. A USB DAC input is a perfect choice for playing digital music from computers, servers or compatible smartphones.

The HTA-2000B v.2 is also an ideal companion for mobile devices – stream music from smartphones, tablets or computers compatible with Bluetooth®.

For those who prefer discrete listening we equipped the HTA-2000B v.2 with a high-end headphone preamplifier.

Preamplifier output is dedicated for an optional external power amplifier or powered subwoofer and speakers.

The newest 2018 version is equipped with
the tone adjustment (Bass/Treble) and the Direct button to bypass it.

“It sounds great in every room dimensions so you feel right at home with this sound image. The amplifier is complete offering the MM compatibility and works without any problems. Don’t be afraid. Yes, it is definitely even more. You can see that when the MC type takes the helm, as for instance the Transrotor Merlo Reference. Suddenly, there is noticeably larger sway, better distinction between the six strings of the guitar, it is simply easier to follow the musical structures that Mr. Miller gives in such a convincing way. There is even more than enough power for a daily use what was checked and impressively proved on Kari Bremnes’ quite exciting “Spor” (2015 version) from the Burmester “Selection Vol. 1”. It was juicy pumped up and controlled, so it was definitely meaningful. Altogether it sounds somehow less round and homely, which is clearly closer to the path of virtue.
A certain amount of pleasant “tube jingle” is also noticeable and this is completely okay: one can certainly hear something from the tubes because they are already installed. Like it. Not the most linear and incorruptible amplifier in the world, but a versatile universalist.

Conclusion
Good news from the mainstream hi-fi world: TAGA’s powerful amplifier is juicy, sophisticated, has quite a good phono preamp stage and can also be used as a center for the analog-oriented people.”

“The sound is quick, agile and selective especially in the micro range, but it can also be heard when it comes to powerful accumulation of voices, not only in the midranges, but also in the low range.

Taga Harmony offers a well-arranged sound with great dynamics potential, but at the same time, you can feel as if it is equally keen on the culture of playback – while listening to some dynamic tracks of German synthpop group De/Vision  it was heard that the HTA-2000B v. 2 liked to have everything under control.
But on the other hand, the signal delivered from the source is trying to turn itself into an adequate amount of watts without excessive nervousness, which gives a sense that the amplifier is in control over each and every impulse directed to the loudspeakers…

… In general, the sound of the HTA-2000B v.2 can be enjoyed by tube lovers, though I must admit that this is not a typical warm, soft message. Yes, there is fantastic plasticity and rich timbre, but there is no overheating of the partial tones – the music from the loudspeaker has vacuum tube taste and aesthetics, but the muscular transistor outputs are also showing their strength and it is them which really create the final effect. And it is very promising, especially for vocal lovers…

… This amplifier has enchanted me with its openness in the midrange frequencies and with its sophisticated timbre to such an extent that in a blind test I could have been easily tricked that I was dealing with a few times more expensive amplification. Taga Harmony handles the vocals in an elegant way, which I experienced while listening to my favorite Freddy Cole’s album – the vocal of the artist was complemented by many characteristic elements for this type of voice. And this combined with the sharply defined virtual sources on the stage increased the perception of music…

I would classify the tested amplifier to a group of amps capable to satisfy wider audience who need high quality sound and who appreciate functionality but also exceptional sound and performance, which make that the amp can easily work with different speakers.”

BOLDLY TOWARDS THE PREMIUM CLASS

A unique review with 3 independent opinions: one by the reviewer and two by private members of the Audiomuzofans Facebook group.
The members are users of two vintage integrated amplifiers, which were the high-end in the 80’s and 90’s (and still remain high on the list).
One is a dual-mono Pioneer A-77X amp with a serious tune-up and modifications and the other one is Sansui AUX-901.

“…Beginning from ZZ TOP and Dire Straits in rock and Gary Moore in jazz, we were able to find a “spark”, dynamics, without such a characteristic problem for less “successful” amplifiers, namely losing of the details, and blurring of vocals. TAGA was melodious in smooth jazz and ballads what is characteristic for tubes and at the the same time it remained detailed and with an extensive scene, almost to be worthy of imitation. While listening to Gwyneth Herbert “Narrow My Man”, we looked around as if by any chance the singer was not standing right in our listening room…

… I always thought that the Pioneer sounded with a tight and vivid bass until I heard the TAGA. For long time I haven’t had such an amp which is able to master the lowest registers in such a way, at the same time improving its timbre to even better emphasize the nature of the instruments, that build up the low frequencies. The effect strongly desired in instrumental music or jazz…

My amplifier (Sansui AUX-901) sounds in a slightly warm analog way with lots of details. I could hear more bass with the TAGA amp on each of the songs like on a strong transistor and it was a well-controlled bass. The HTA-2000B v.2 amplifier is more musical but when it comes to the spaciousness of sound, depending on a music genre, one time the winner was Sansui and another time TAGA…

Summary
…It is ideally suited for the instrumental and acoustical music as well as for well-arranged pop or rock. Everyone who appreciates the separation of instruments and speed and dynamics will be delighted with a purchase of this device…“

Tested together with the Diamond F-200 flagship speakers  by “STEREO I KOLOROWO underground” at the Audio Video Show in Warsaw during an unusual music session.

“The TAGA Harmony set provided very euphonious, energetic and malleable sound with great stereo and superior space. There was an illusion of participating in a live concert. This phenomenon was reinforced by the dense and analytical sound of the Diamond F-200 speakers and the high physicality of the HTA-2000B amplifier, which dynamism seemed to have no limitations. At the time when Vincent Bélanger pulled out the fiddlestick and began to move it on the cello strings, it was hard to distinguish the sound played by the speakers from this being played live. The amazing thing.
Vincent prepared about a 30 minute concert, played a variety of pieces from the “Conversations”, he impressed us with different playing styles on the cello and flirted with the audience using his virtuosity. However, it was impossible to distinguish the real cello music from the background played by the speakers. This demonstrates very high values of the TAGA Harmony Diamond F-200 speakers, because the high-end is considered to be such a system, which plays genuinely “live”.”

Powered by Convert Plus