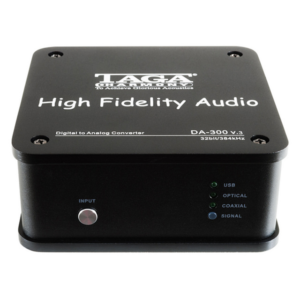 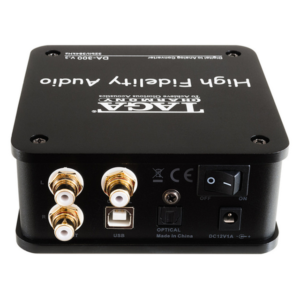 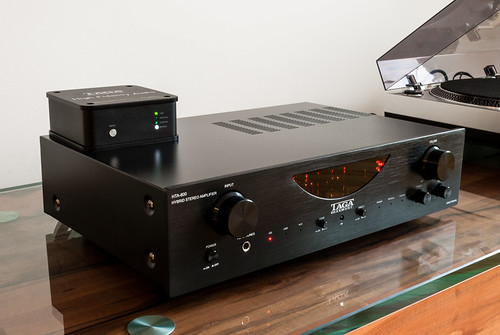 MELODICALLY AND CULTURALLY
“I liked Taga Harmony DA-300 the most because of its diverse style of playing,  in jazz and classical music it was able to show many relationships between these specific genres  – jazz turned out to be sonorous, mainly due to the shimmering accent while hitting the drum cymbals or also impressive, almost virtuosic, sound of a lead guitarist Lee Ritenour.
In the classical music there was a momentum in building the sound space, whenever I reached for music based on large symphonic compositions, my listening room filled with music in an impressive way.”

SUMMARY
“Taga Harmony DA-300 v.3 should be considered a very good construction, which should fully meet the needs of people who want to improve the sound quality of their system. The advantage of the DA-300 v.3 is also the versatility – this external converter can be used with various systems and devices. In addition, its small size makes that we can find a place for it anywhere.”

“You know what? We have tested many devices of this type so far and taking into account the price factor it looks like we will make friends with this device for longer. But what really charmed us in this box?…
It sounds in an equal, real and non-colored way in the whole range. The lower band is a slight exception. The lowest registers are gently overloaded. The bass is quite meaty but not sloppy. Maybe this is a factor that makes it so hard to imagine such “playing” from such a tiny device? No. There are other things that have also attracted our attention. We are moving up to the medium registers. They are well joined together with the bottom and top of the range, without unnecessary peaks. Filled with a lot of information, legible, make the voices whether male or female very saturated… Very open, saturated and with the structure and  tangibility unprecedented in this price range. Going further we move smoothly into the highest registers. Smooth, non-intrusive, detailed with a large amount of micro-information. We get the most pleasure from the records of The modern jazz quartet with Milt Jackson as a leader. Oh, how his vibraphone sounded, it was vibrating in the air. Full, saturated sounds, with long tons. Taga has provided so many nice moments with music. The soundstage is being built in a very realistic way. Each instrument has its place in the space. When it comes to resolution, it is at a level that allows you to determine exactly where the musicians were standing, but we are not able to determine it to an inch. The holography is more noticeable in aspects of “closer and further”. The sound breaks away from the speakers without any problem. Between them and outside of them. If we had to guess the price range of this device in a blind test? What a hard nut we would have to crack …”

Summary
“The latest Taga Harmony DA-300 v.3 converter proves one thing. One does not have to spend a fortune on audio devices to give us a lot of fun from listening to music. Secondly. The entire system is responsible for the final effect. All devices have to form one whole. The DA-300 V.3 converter can be described as a small volcano of energy. Looking at it, it’s hard to imagine that something so small can reproduce music on such a scale. Some time ago we had a similar impression while listening to tiny devices made in England. Small but with a big heart for music. And that’s exactly what Taga DA-300 v.3 is all about. Based on our own experience, a change of power supply will bring a good deal in such a device and we decided to convince ourselves about that … The device stays with us at the AMF editorial office.”

“…The designers managed to achieve a truly astounding level of details without side effects. In that aspect Taga DA-300 was the best affordable converter which we have tested. It did not give Matrix Mini-i a chance, but also made Myryad Z20 and Audeze Deckard feel slightly embarrassed.

Thanks to this small box we can really hear a lot, nothing slips away, sounds are clear, clean, lighted in the way that we can easily keep track of individual instruments, even in a fairly complicated mixes…It is great.

The next award for the small TAGA is for its sound space. To be honest, I did not expect such a performance for the money…I was very surprised. First of all, a huge momentum of the scene…a large amount of air between the sounds, the freedom and the absence of any restrictions. Music has a lot of room to fade away, nothing is compressed nor closed… The sounds emerged freely on the far sides, above me and on the back of my head.

The small Taga DA-300 sets the virtual sound sources closer and farther, higher and lower (!), accurately lays out the stereo scene from the left to the right, everything is precisely kept in check, nothing is mixed up…

Summary
Taga managed to develop a very affordable device which avoids a trap of many budget components. This small DAC sounds with surprising resolution and details, but not with clatter nor surgically. The sound – despite a slightly withdrawn midrange – is very coherent and consistent. The transducer plays brightly, lightly, clearly, with good dynamics and speed, the sounds are not greasy and slow. A mild dryness in the mids is compensated by sound spatiality which is phenomenal for that price level. Such a space is really something! Taga DA-300 is a very interesting offer for those who want to start their journey into listening digital files and for people who want to improve the sound of their a DVD, BlueRay or an affordable CD player. Recommended.”

Powered by Convert Plus